skip to main | skip to sidebar

We’re entering a new age of regulation on labor, with increased enforcement, and credit unions must prepare and protect themselves.


Mortgage Loan Officers and Originators are No Longer Exempt under the Administrative Exemption
The United States Department of Labor (DOL) recently released a new Administrator Interpretation declaring that mortgage loan officers do not qualify as administrative employees under the administrative exemption of the Fair Labor Standards Act (FLSA) and are therefore nonexempt. This new interpretation reverses two previous opinions and represents a significant policy shift.

As noted in the Department of Labor Administrator’s Interpretation No. 2010-1:

Thus, a careful examination of the law as applied to the mortgage loan officers' duties demonstrate that their primary duty is making sales and, therefore, mortgage loan officers perform the production work of their employers. Work such as collecting financial information from customers, entering it into the computer program to determine what particular loan products might be available to that customer, and explaining the terms of the available options and the pros and cons of each option, so that a sale can be made, constitutes the production work of an employer engaged in selling or brokering mortgage loan products. Such duties do not relate to the internal management or general business operations of the company; they do not involve servicing the business itself by providing advice regarding internal operations, unlike the duties of employees working in, for example, a firm’s human resources department, accounting department, or research department. The typical job duties of a mortgage loan officer comprise a financial services business’ marketplace offerings, the selling of loan products. Their duties involve the day-to-day carrying out of the employer’s business and, thus, fall squarely on the production side of the business.

This Interpretation does not address whether the sales duties of any particular loan officer fall within the outside sales exemption or are limited to inside sales.

We believe it is very important that your credit union review each currently “exempt” position to determine if it falls in a similar category as the Mortgage Loan Officer.

Keep in mind that one of the fastest growing types of class action lawsuits are those where a class of employees (like Mortgage Loan Officers) claim they were misclassified as exempt employees, when they should have been classified as nonexempt and paid overtime. The exposure is enormous. If you believe this may apply to your credit union, it is important to reclassify the position as non-exempt and comply with applicable overtime requirements. And of course, it is always a good idea to consult with an HR attorney.


The National Labor Relations Board (NLRB) and Employee Free Choice Act
Fred Becker, previously the associate general counsel for the Service Employees International Union (SEIU), was a recess appointment to the National Labor Relations Board (NLRB). This appointment drew fire from business groups who have alleged that he is unduly pro-labor and intends to use his post to administratively implement the Employee Free Choice Act (”EFCA”), which has floundered in Congress.


The NLRB has invited experts from other agencies to train its staff in rulemaking procedures. By addressing issues through the rulemaking process rather than its traditional case-by-case adjudicatory approach, the newly constituted Board, with a majority composed of former union attorneys, will be able to:

Also, and perhaps most importantly, the courts generally are much more differential to agency rulemaking initiatives as opposed to the more severe judicial scrutiny often given to individually adjudicated cases. Thus, initiatives of the new Board may be better positioned to withstand judicial challenge.

Mr. Becker’s appointment is just one more step in the Obama Administration’s plan to make it much easier for unions to assume control of the work place, including credit unions. Look for a late year push to pass some version of EFCA. Be prepared, this undoubtedly will present big changes in employment law.
Posted by Jim and Tina Aho at 9:17 PM No comments:

Ratios from September 30th at a glance

NCUA released the September 30th call report numbers and they are not pretty. The ROA of credit unions is shrinking, being hit hard by corporate and stabilization losses as well as shrinking spreads. The table below shows the differences by asset size and demonstrates that the smaller the asset category, the harder the hit. (Click to increase size of chart below)

Next let's look at credit union performance by state. In this illustration, I have sorted by ROA and the sand states came right up to the top of this list. The states are split up into two graphs. 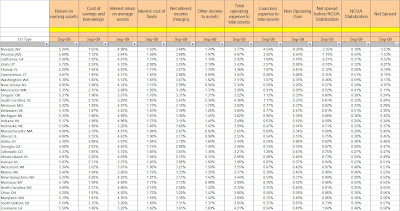 Second graph shows the credit unions with the highest ROA.

Where is your credit union's capital headed?

If you were asked to name the primary reasons for declining ROAs and capitalization in credit unions, you would probably mention the write-off of Corporate Membership Capital and NCUA stabilization expenses. Of course both of these expenses contribute to the problem, and both are not items management teams can control; however, many credit unions are facing an additional “growing” problem.

During the first nine months of 2009 credit unions had an average annualized growth rate of 7.6%, an average ROA of .27% and an average capitalization of 10.06. If the entire industry (886 billion) were one gigantic credit union, at this growth rate and current earnings, capitalization would shrink to 8.05% by December of 2014. Growth requires earnings in order to sustain capital. To sustain capital with this growth rate, the ROA would need to be .97% year after year!

We recently worked with a credit union whose CFO illustrated this point beautifully.  He walked into a recent staff meeting steering a wheelbarrow full of play money, and then wheeled around the room looking for a good place to park the $34 million “dollars.” A bank would pay him .05% Corporate would pay him .1% and so on. He said, “When more money comes into the credit union than what goes out via loans to members, I have to find a place for the money. When you match a competitors’ CD rate for 2%, I have to find a place to invest the funds. We are currently losing money on any funds brought into credit union accounts that pay more than .1%, unless it is money used to fund loans.”

The barrow full of money presents both a temptation and a problem for cu’s…how does one maximize returns in a down rate economy, without taking on greater risk?

When a credit union takes in more deposits than it is able to lend out to its members the management team may start looking for riskier ways to increase yield, such as retaining more mortgage loans on their balance sheets for fixed terms, jumping back into the indirect market or  buying loan participations to boost return.

A better way to protect a credit union’s capital position is to price deposit accounts in a way that maintains growth rates in proportion with the credit union’s ability to produce ROA. This avoids the pressure of increasing loans during a time of high unemployment

Ultimately, credit unions that are able to protect or grow their capital position during this economic cycle will be the credit unions positioned to capitalize on opportunities this environment will ultimately generate.

Posted by Jim and Tina Aho at 2:35 PM No comments:

Jim and Tina Aho
We began Aho Consulting in 1989 to provide planning and educational services to credit unions.